Random Hacks of Kindness (RHoK) Australia is a part of a global community of technologists and changemakers who are ‘hacking for good’. Twice a year, they run hackathons that bring together volunteer developers and tech-savvy do-gooders to work with charities, community groups and social enterprises.

The RHoKs conducted a Hackathon the week end of the 4th and 5th of June 2016 at Swinburne University, Hawthorn campus, involving a number of inspiring changemaker projects, including Workforce Plus 20Squared project, involving the development of an innovative tool that would support the young people on the 20Squared project to capture and store multimedia content relating to their work experiences! 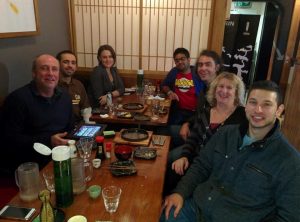 This week end was followed up by a Development Team meeting at a local restaurant to discuss future actions. The full Development Team were present: From Left to right: Simon Scrase, George Bekos, Themiya Nanayakkara, Jon Daska, Bernadette O’Connor and Rob (Alex Hoeper had left to see the Living End.

The Workforce Development Team achieved a number of great outcomes, including the creation of a Facebook Tool to be used during the project to capture critical multimedia content for the Virtual Reality Work Experience game. The young people will now be able to post material on the 20Squared Facebook and these images will be automatically stored.

In addition, a prototype virtual reality simulation was created and significant headway was made on the content plan for guiding the collection of work experience content, as well as potential training modules involving ‘social media’ assignments!